I recently discovered a free series of rules from Quick Play Rules released via Firepower Gaming and was particularly taken by the set for the American Civil War: Rebels & Yankees.

At only 29 pages, with a clear well spaced layout, the rules are very easy to read with a good structure and lots of useful tables etc.  If they play as quickly as they read I'll be well pleased.

I did spot a few things that I would class as glitches in table layout and design but that doesn't detract from the rules themselves.  However, I would like to use them to highlight how simple changes can have a large impact of clarity and readability.

Here's the portion of the page which defines the process and the lookup table. 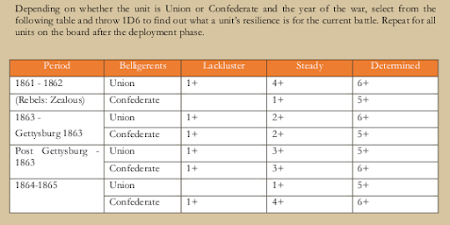 Looking at this in detail:


A quick rework gives this table:

Now each part of the table is specific and mutually exclusive.  The classification of the Confederate troops as "Zealous" has been moved to a footer but it could equally be an additional one-entry column.  The latter is a bit excessive for one entry.

Here's the portion of the page with the lookup table for the results.

Looking at this in detail:

This version assumes that the actions in the table are all compulsory so "Forced" is superfluous. Even so it's still a bit busy with lots of "Carrying On".

I did try a version that merged like cells across rows, as there's a lot of duplication, but it was a touch too hard to lookup values in columns. One way to solve this is to merge some cells as follows:

I think this is still sub-optimal but it just goes to show how hard this is.

My name is Martin Stephenson.
Like many people I do more than one thing to earn a living. This is my portfolio where I draw together the threads of my professional life.
To contact me please use the email form at the foot of the page.

Most Popular - This Month

Posts at The Waving Flag