On Thursday I showed how grouping could improve table design as follows: 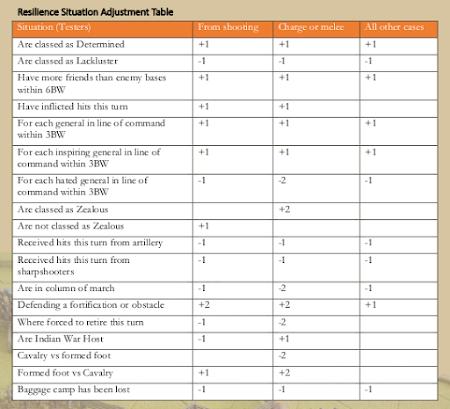 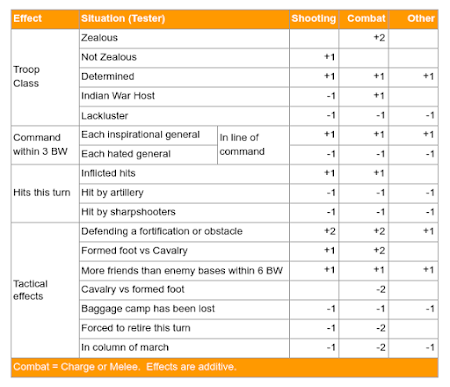 The improvement is clear but there was something nagging me.  Mainly it was the Command modifiers. These had to share a merged cell primarily for space reasons but also for extra brevity and clarity.   However there's another issue: these modifers are optional and are part of the advanced rules.  This needs to be made clear in the table somehow.

At this point I realised that basic table design has its limits.  By chance I was reading twitter when I came across some sample pages from another rule set and the answer became obvious: colour.  A few minutes later I'd produced this version: 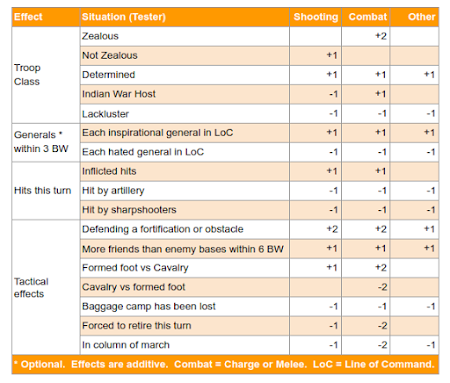 This table removes the merged "In line of command" cell because it breaks the colour scheme.  The use of the "LoC", with an explanation in the footer, solves the resultant space and clarity issues.  More importantly, the renamed Generals group can now be marked as optional by the use of an asterisk in the first column.

The first column has been left white to draw the eye.  Of course it too could be coloured, but not alternating colour, however I felt the colouring should be as minimal as possible.

The same scheme can also improve other tables like this one:

Finally, to balance the table the footer text has been emboldened. That's it for now.

My name is Martin Stephenson.
Like many people I do more than one thing to earn a living. This is my portfolio where I draw together the threads of my professional life.
To contact me please use the email form at the foot of the page.

Most Popular - This Month

Posts at The Waving Flag